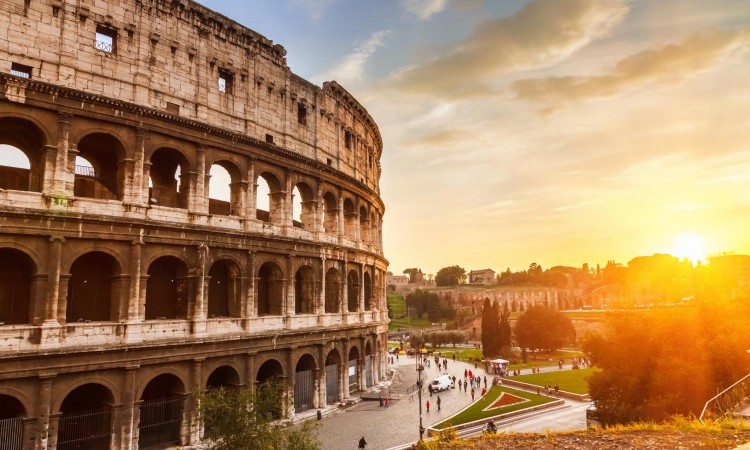 Tribute to Rome is the exclusive solo exhibit that is running through Wednesday on occasion of Rome haute couture week (AltaRomaAltaModa), showcasing New York-based street artist DAIN. Curated by Valentina Ciarallo, the show, set in the beautiful Spirito Santo in the Sassia museum complex,

unveils not only the glamourous side of the eternal city showing divas or models who, with DAIN’s intervention become even more unique, but also directs the attention of the Roman institutions toward Street Art.

DAIN is one of the most influential artists of New York’s street art scene. Born and raised in Brooklyn, this mysterious artist, who doesn’t reveal his real name and identity but is of Italian origins (his grandparents migrated to the US from Calabria), became very popular for his urban portraits, which depict Hollywood celebrities’ faces, from Audrey Hepburn, Grace Kelly to Angelina Jolie or Kate Moss, recomposed using the collage technique and retouched with his unique tag: a “circle and drip” around the eye of the stars he portrays. A sort of graffiti monocle, from which his whole career departed.

His portraits can be found in the main streets of the Big Apple: on postboxes, portals and walls. He has exhibited not only in New York but also in Chicago, Miami, Portland, Montreal, Paris and London. And now, for the first time, also in Rome.

This special project, which he dedicates to Rome includes 10 exclusive works representing film icons such as Sophia Loren or Liz Taylor alongside with fashion icons like Twiggy, re-elaborated in a unique way by the artist.

“It’s a mix of images, I can combine the lips of American actresses with Italian eyes,” said DAIN. The women portrayed are “new iconographies to be discovered,” he explained.

DAIN’s portraits are deconstructed and the image shows a sense of precariousness in the form, but still remains very powerful and incisive. His creative process strats from black-and-white photos, which he layers with old advertisements, printed fragments or logos from vintage magazines.

“I started doing graffiti in New York when I was 7 years old and one morning I woke up and decided I wanted to be a street artist,” affirmed DAIN. “When I was an adolescent I became passionate about movies in black and white. I love films from the 40s and 50s, the actresses of the time, like Bette Davis, their faces, the old pictures in black and white. A simple beauty, where everything can be imagined.”

As already mentioned, among the goals of this exhibition there is also the objective of highlighting the importance of art also in social terms, as a medium to commend entire neighborhoods of the city, especially the roman suburbs.